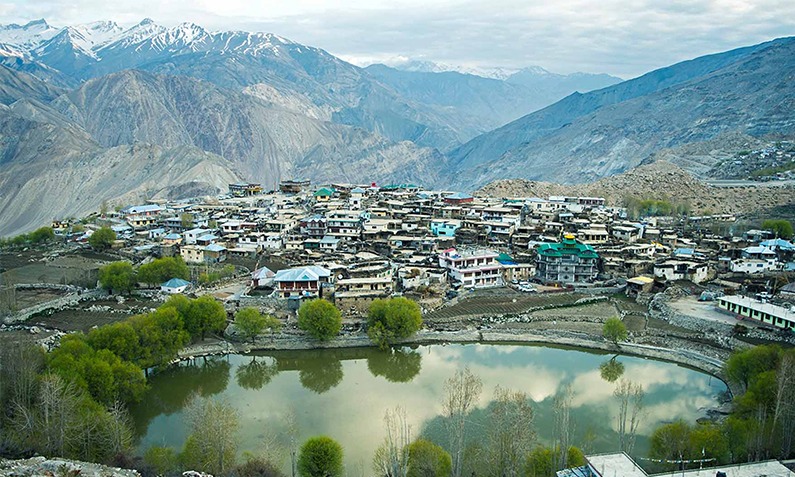 Located in the dizzying heights of the Himalayas, surrounded by the Tibet to the east, in the northeast corner of Himachal Pradesh, about 235 kms from Shimla is a tremendously beautiful district having the three high mountains ranges i.e. Zanskar, Greater Himalayas and Dhauladhar, enclosing valleys of Sutlej, Spiti, Baspa and their tributaries. All the valleys are strikingly beautiful. The slopes are covered with thick wood, orchards, fields and picturesque hamlets. The much religious Shivlinga lies at the peak of Kinner Kailash mountain. The old Hindustan-Tibet road passes through the Kinnaur valley along the bank of river Sutlej and finally enters Tibet at Shipki La Pass. And it is not only the scenic beauty which appeals to the young and old alike but also the life styles of the people, their culture, heritage, customs and traditions. 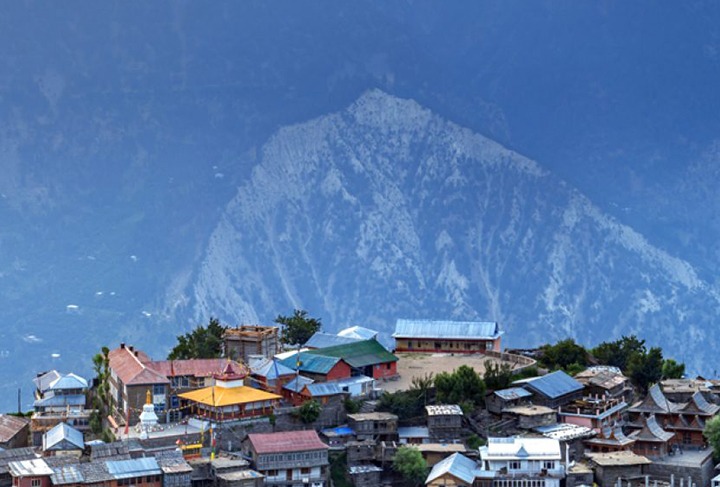 Kalpa is situated at an altitude of 2759 m from the sea level, on the old Hindustan Tibet Road at a distance of 260 km from Shimla. Earlier it was the District Headquarter of Kinnaur. It is 14 kms. and half an hour’s drive from District Headquarter Reckong Peo. It has all the characteristics of a heritage village. Kalpa came into prominence in the wake of British Governor General Lord Dalhousie’s visit in the 19th century. The Narayan-Nagani temple is an exemplary of local craftsmanship. There are couples of Buddhist monasteries at Kalpa including the Hu-Bu-Ian-Car Gompa. Kalpa is dramatically located close to the foot of 6050 meter high Kinner Kailash. This is the legendary winter home of Shiva. This is a spectacular sight early in the morning as the rising sun touches the snowy peaks with crimson and gold light. 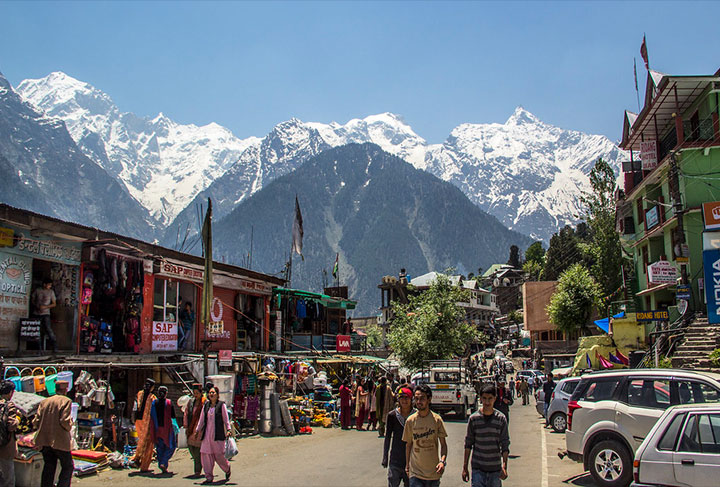 Reckong Peo is situated at an altitude of 2670 m from the sea level, located 235 km from Shimla. It is the District Headquarter having a panoramic view of Kinner Kailash. Kinner Kailash mountain is regarded as one of the mythical homes of Lord Shiva, here is a 79 feet high rock formation that resembles Sivalinga. This Sivalinga changes the colour as the day passes. Also visible on the stretch is the peak of Raldang (5499 m). There is a Buddhist Monasteries in the Reckong Peo. 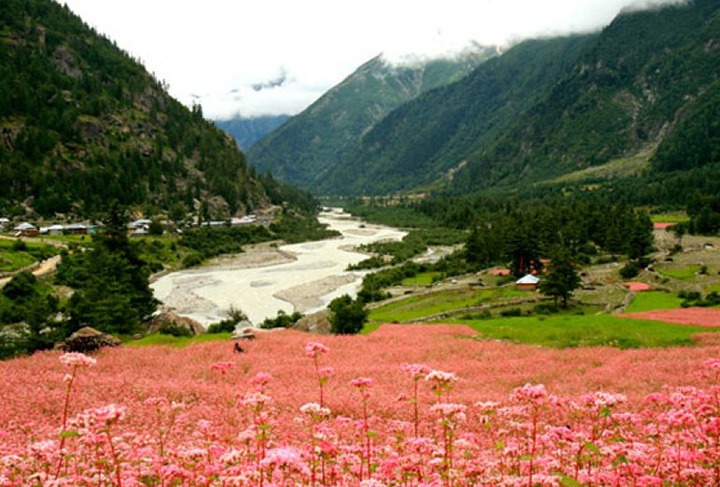 Sangla, a populous village, situated on the right bank of the Baspa River, is famous for its high fertile soil, at an elevation of 2621 m above the sea level and falls at a distance of 17 km from Karcham. It is built on a slope with the house rising one above the other, the scene being closed by the gigantic Raldang peaks towering behind. The forest scenery all-around and the eternal snow peaks are picturesque. Journey from Karcham onwards is enjoyable and adventurous throughout the valley. The natural scenery all around and the eternal snow view are picturesque and charming. It is located in the famous Baspa valley. The whole of the Baspa valley is one of the prettiest valleys mainly due to its flat terrain and green vegetation on the slopes which are not very steep. 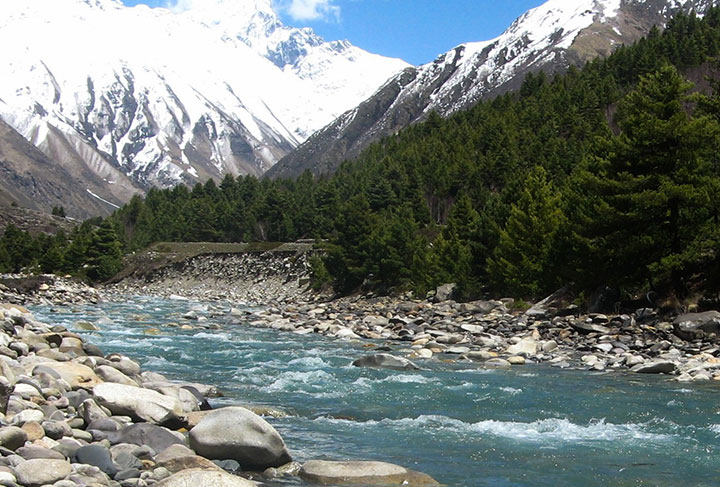 Chhitkul (3450m): This is the last and highest village in the Baspa valley. It is situated on the right bank of the Baspa River. There is a road along the left bank from Karchham. There are three temples of local goddess Mathi, the main one said to have been constructed about 500 years ago by a resident of Garhwal. The square ark of the goddess, is made of walnut wood and is covered with clothes and surmounted by a tuft of yak tail. Two poles called bayanga are inserted into it by means of which it is carried. The goddess has a mouthpiece. 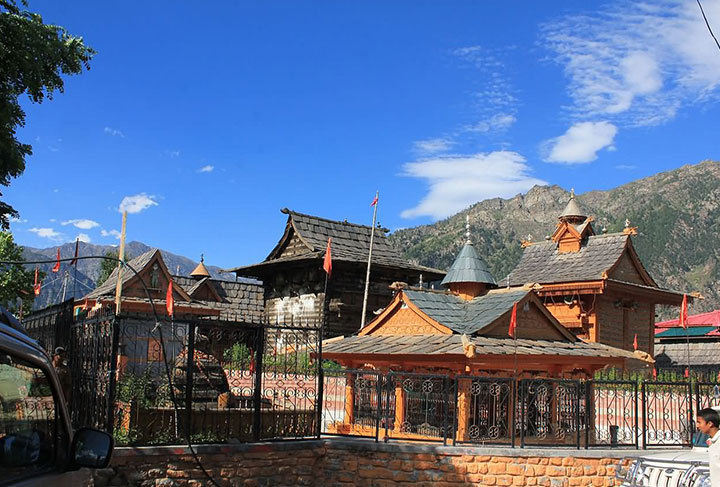 Kothi is also called Koshtampi is an ancient large village in tehsil Kalpa, little below the Kalpa and nearby Reckong Peo. The village is environed by the fields and fruit trees punctuated by vineyards. It is over shadowed by Kinner Kailash peak which forms a magnificent backdrop. The village with its attractive temple, tanks and gracious willows makes an altogether lovely landscape. The goddess Shuwang Chandika temple is in the village. The local people hold the goddess in great reverence and consider her to be one of the most powerful goddess. There is an image of gold seated in an ark. It is danced up and down by four persons at the time of worship. There is yet another temple dedicated to Bhairon.