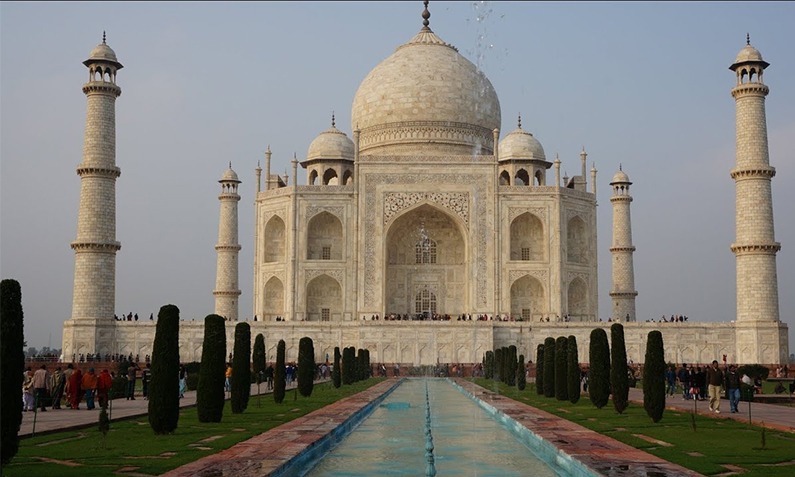 Located on the banks of Yamuna River in Uttar Pradesh, Agra is the most popular and one of the major tourist attraction of India. Agra houses Taj Mahal which is one of the seven wonders of the world and UNESCO world heritage site. Apart from the immortal Taj Mahal Agra also houses The AGRA FORT and Fatehpur Sikri (Akbar’s abandoned capital) both of which also feature on the UNESCO world heritage sites. During the Mugals era Agra developed as a centre of art, culture, learning and commerce, especially with the help of the Mughal rulers Akbar, Shah Jahan and Jehangir. Agra is also famous for its cuisine and the famous Panchi ka Petha. Besides world famous heritage sites today the city of Agra with its laid-back style of living, treasured architecture, jewelry and handicrafts, is one of the remarkable and most visited cities in the world. 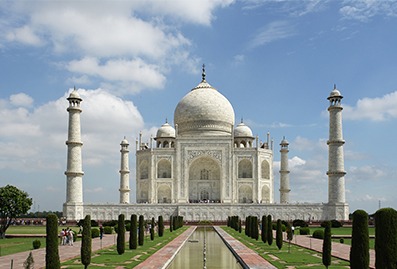 The Taj Mahal, an Icon of India is one of the most famous tourist attractions in India and across the world. It is one of the Seven Wonders of the World. The Taj Mahal was built by Mughal Emperor Shah Jahan in memory of his beloved wife Mumtaz Mahal, as a symbol of eternal love. Completed in 1653 it took 20,000 workers 22 years, 41 millions rupees and 500 kgs. gold to complete this great monument. Taj Mahal is built on a red sandstone base, topped by a huge white marble terrace on which rests the dome flanked by four tapering minarets. The floors and walls have intriguing calligraphy and mosaic work adorned with precious stones. 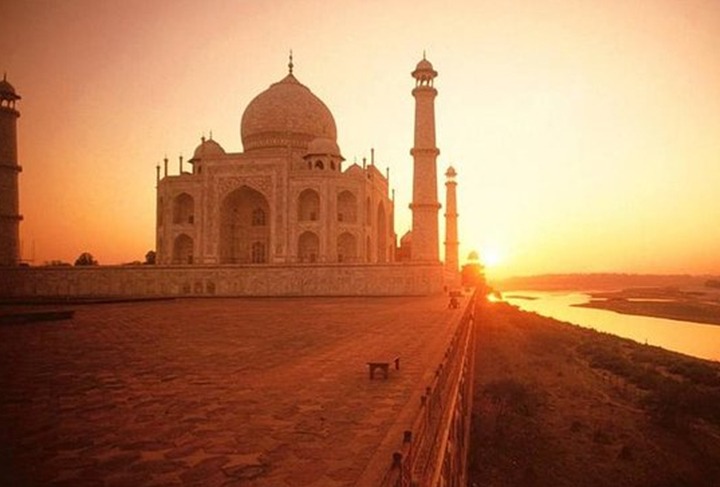 Watching the sun rise up from under the sea of sky is a sight to behold, and what better way to experience it than to watch it take its place up there while you stand on the premises of one of the Seven Wonders of the World. It’s a moment of delight when the beauty of the sunrise and the Taj Mahal culminate together to make for some awe-inspiring images of the Taj, being transformed from soft grey and pink to a soft red glow. 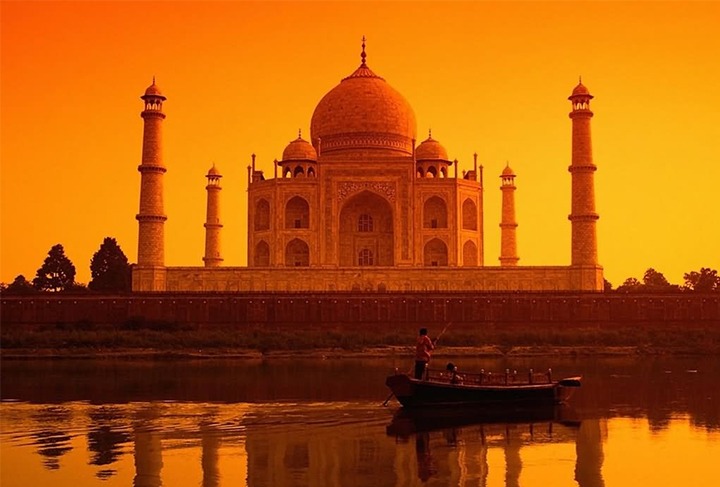 After shining its glory all through the day, when the sun climbs down the stairway of heavens and gets ready to say adios to the world, it plays its final trick in the book by lending Taj Mahal a different appearance with the shades of fiery yellow being transformed into soft exotic orange and finally to pearl white again, until the full moon prepares itself to accompany the Taj all through the night while dazzling the world with its quiet heavenly elegance. 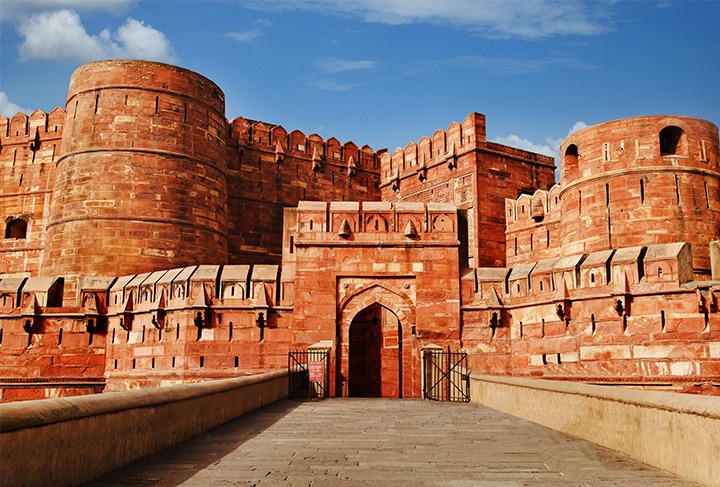 Over looking the river Jamuna The Mighty Agra Fort was commissioned by the great Mughal Emperor Akbar in 1565. During Shah Jahan’s era, the red sandstone fort was reformed into a palace and extensively repaired with marble and pietra dura inlay. Distinguished buildings in the fort are the Pearl Mosque, Jahangir’s Palace, Diwan-e-Am, Diwan-e-Khas (public and private audience halls), Shish Mahal, Musammam Burj and the Khas Mahal. The fort is semi-circular shaped, flattened on the east with a long, nearly straight wall facing the river. 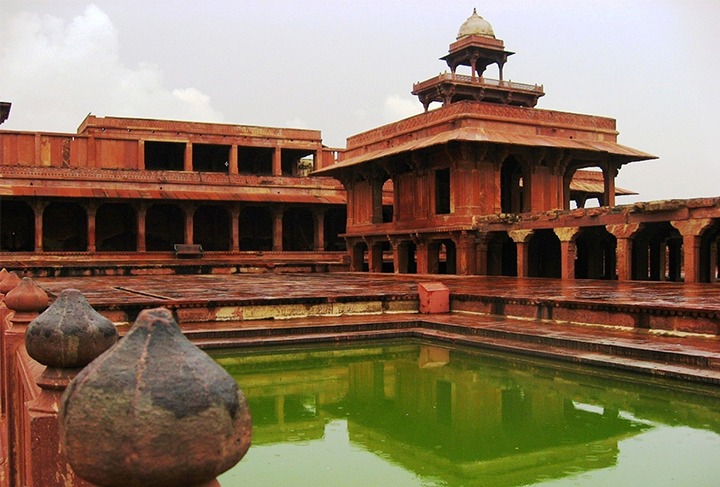 Built by Akbar, the Mughal emperor in 1570, the city was a tribute to Sufi Saint. Fatehpur Sikri is a perfect blend of Indian, Islamic and Persian architecture and it was built using red sandstone. For around 10 years, the city remained the capital of Mughal Empire. The city has a 6-kilometer long wall on three sides and there are towers and gates. It houses some of the city’s important buildings namely Buland Darwaza, Birbal’s House, Panch Mahal and Jama Masjid. The entire city along with all the important constructions including royal palaces, Jama Masjid and courts were declared as World Heritage Site in the year 1986.

India’s first tomb to be made completely out of marble, Itmad-Ud-Daulah signals the beginning of new era in Mughal architecture. Until then, it was buildings of red sandstone. It was constructed during Jahangir’s period. The 21-meter high tomb was constructed in memory of Mirza Ghiyas, who was the father-in-law of Jahangir. He was bestowed with the title Itmad-Ud-Daula, which means pillar of the state. Influenced by Islamic architectural style, the monument’s towers display Persian touch. The wall paintings inside are sheer beauty to view. 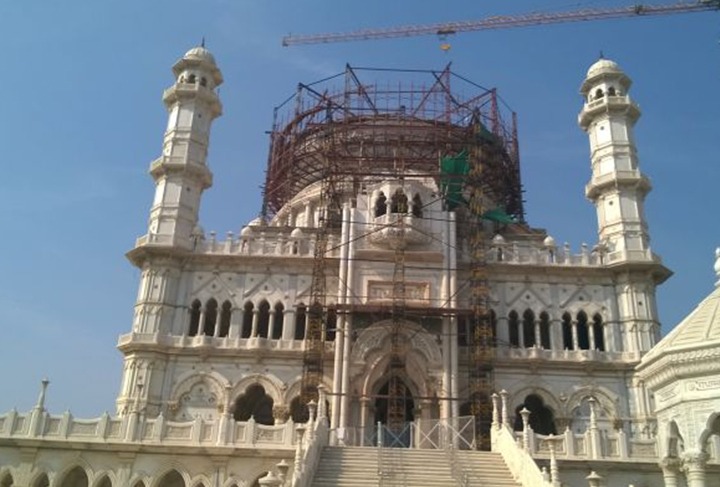 The magnificent marble shrine of Soamiji Maharaj, the founder of Radhasoami Sect lies in Dayal Bagh north Agra. Its construction started way back in 1904 and is still contuning near completion, as the builders want to create a monument to rival the Taj in size and grandeur. The shrine surrounded by sprawling lawns has already emerged as one of the important attractions of Agra.