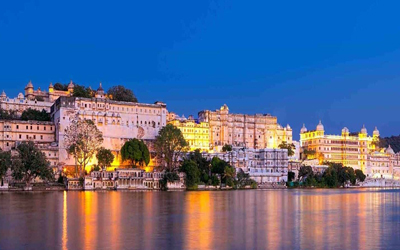 Located 403 kilometres southwest of the Pink City, Jaipur . Udaipur city is also referred to as the “Venice of the East”, the “Most Romantic City of India” and the “Kashmir of Rajasthan”. Udaipur the “City of Lakes” is one among the most romantic and most beautiful cities of India. Udaipur placid lakes and historic forts also crowned it the ‘City of Historicity’. Udaipur is famed for its numerous man-made lakes, landscaped gardens, and Rajput palaces, many of which are now converted into luxury hotels. It gets a number of foreign and domestic tourists for its culture and the royal ambience. The city is dotted with old havelis and temples. Major tourist attractions of Udaipur are: City Palace, Lake Palace, Jag Mandir, Fateh Sagar Lake, Lake Pichola, Swaroop Sagar and Saheliyon Ki Bari etc.

BEST TIME TO VISIT: Udaipur offers moderate climate all through the year. But the best season to visit the place is from September to March. 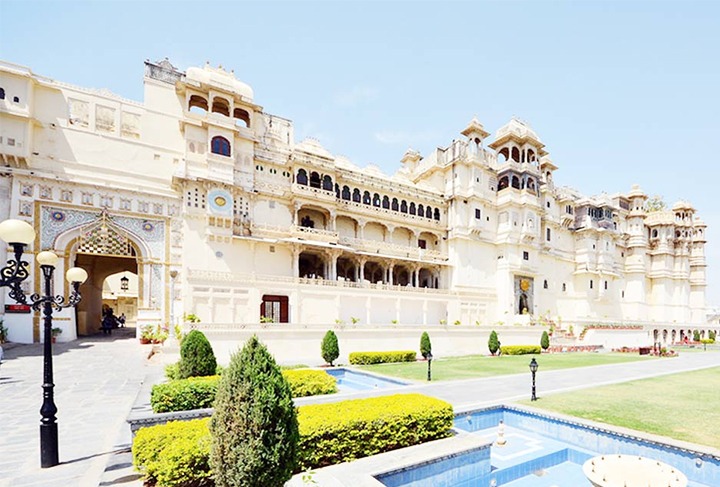 Located on the east bank of the Lake Pichola and has several palaces built within its complex.It was built over a period of nearly 400 years being contributed by several kings of the dynasty. The City Palace in Udaipur was built in a flamboyant style and is considered the largest of its type in Rajasthan, a fusion of the Rajasthani and Mughal architectural styles, and was built on a hill top that gives a panoramic view of the city and its surrounding, including several historic monuments such as the Lake Palace in Lake Pichola, the Jag Mandir on another island in the lake, the Jagdish Temple close to the palace, the Monsoon Palace on top of an overlooking hillock nearby and the Neemach Mata temple. These structures are linked to the filming of the James Bond movie Octopussy, which features the Lake Palace and the Monsoon Palace. 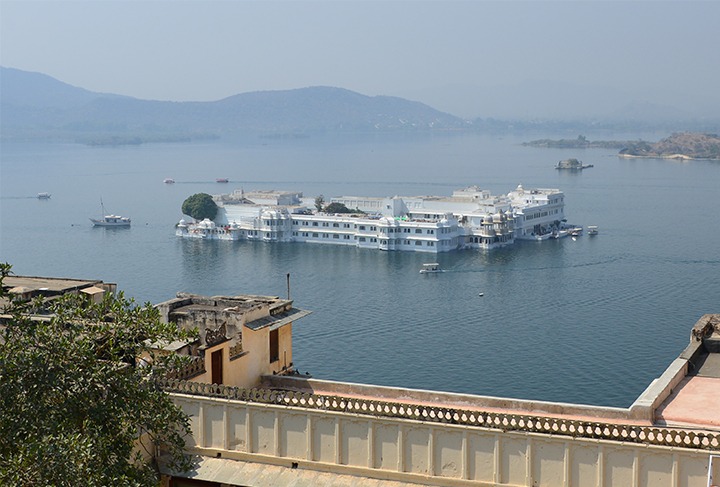 Located in the heart of the city Udaipur, Pichola Lake is the oldest and one of the largest lakes of Udaipur. Pichola Lake is one of the most beautiful and picturesque lakes of Rajasthan. In 1362, the beautiful lake was built by Pichhu Banjara during the ruling period of Maharana Lakha. The dimensions of Pichhola Lake, it is extended to 3 miles in length, 2 miles in width and has depth of 30 feet. The lake looks more enchanting with its scenic surroundings. Pichola Lake is enveloped by lofty Palaces, temples, bathing Ghats and elevated hills on all its sides. In the southern part of this lake, there is a hill that is known as Machhala Magra and one can see glimpse of Eklinggarh Fort from here. Above all, a trip to Pichola Lake would be incomplete with a boat ride. The pristine blue waters of the lake leave a soothing impact on the spectator. At the time sun-set, a boat ride in this lake is sufficient to enthrall anyone. 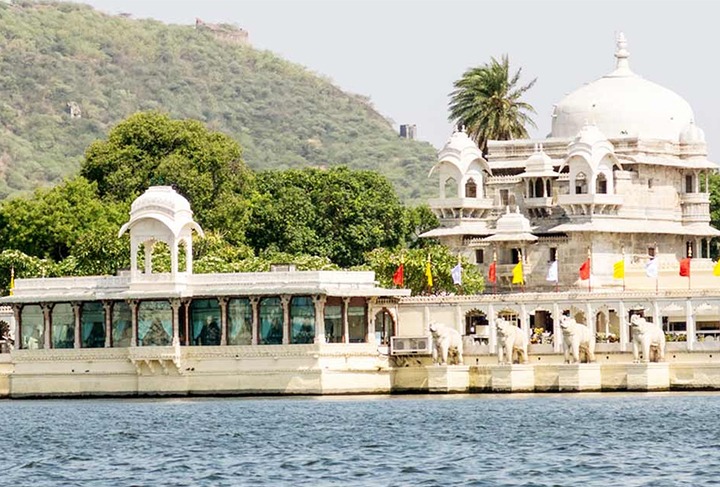 Jag Mandir Palace is a beautiful palace located on the southern island of Lake Pichola. It is also called the “Lake Garden Palace”. The three-storied Palace is a palatial structure made in yellow sandstone and marble. Built in early years of 17th century, Jag Mandir Palace was raised by Maharana Karan Singh to serve as a hiding place for Prince Khurram. It is named as “Jagat Mandir” in honour of the last named Maharana Jagat Singh. The royal family used the palace as a summer resort and pleasure palace for holding parties. The palace served as a refuge to asylum seekers on two separate occasions. You would be mesmerized to see eight life-sized Elephants carved out of white marble, giving the impression of guarding this beautiful island Palace. In the present date, the Palace complex also comprises a Darikhana Restaurant that serves lip smacking cuisine of Rajasthan. Jag Mandir Palace is a nice place to visit and explore the halls, where once the royalty of Mewar used to reside. 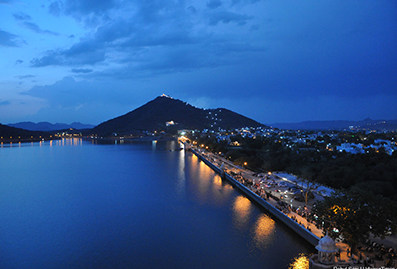 Fateh Sagar Lake is the second artificial lake of Udaipur. Located in the north of Lake Pichola, Fateh Sagar Lake lies just besides the entrance to Moti Magri Hill. Built in 1678 by Maharana Jai Singh, Fateh Sagar Lake got its name from Maharana Fateh Singh, who later made additions to it. Talking about the statistics of Fateh Sagar, the lake extends to the length of 2.4 km, 1.6 km. in width and deep to the extent of 11.5 meter. Fateh Sagar Lake is well-planned with three intake channels and an overflow channel that is usually brought into play in the rainy season. Fateh Sagar Lake is embellished by three small islands, which can be reached by taking a boat ride in the lake. The largest island of the lake is developed into a park by the name of Nehru Park. The garden comprises a boat-shaped restaurant and a small zoo for children. This island park is the favorite picnic spot of Udaipur dwellers. 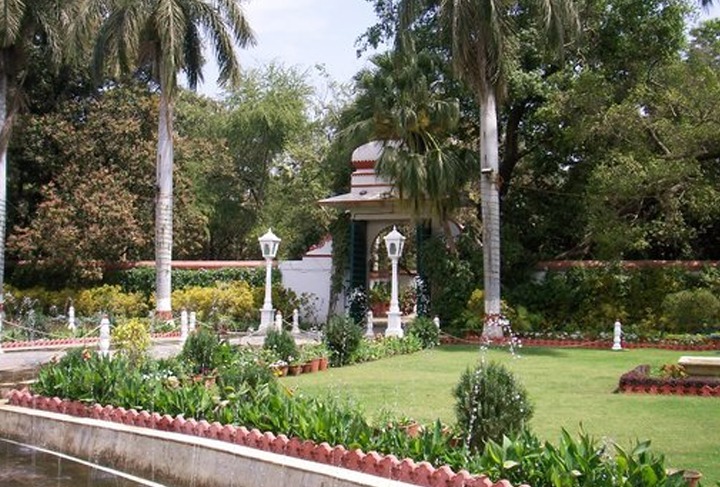 Located on the banks of Fateh Sagar Lake, presenting a green retreat in the dry lands of Rajasthan. Saheliyon Ki Bari is one the most beautiful gardens and a major tourist destination in Udaipur. The garden is famous for its lush green lawns, marble art and fountains. Saheliyon Ki Bari means “Garden of maids”. Garden of maids was built in the 18th century by Maharana Sangram Singh for the royal ladies. The superb architecture of the garden provides a breath-taking view to any observer. The garden is embellished with numerous fountains in its four water pools, chiseled kiosks and marble elephants. It is also celebrated for its lotus pool and bird-fountains. The lush green lawns, flowerbeds, and marble pavilions further enhance the romantic ambience of this magnificent garden.