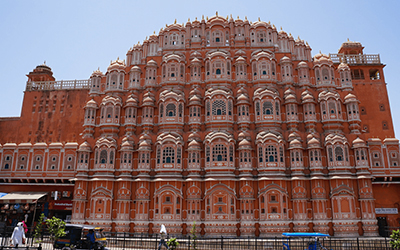 Located around 260 kms from New Delhi Jaipur is the capital and largest city of Rajasthan. Founded on 18 November 1727 by Maharaja Sawai Jai Singh II, the ruler of Amber, the city has been named after the Maharaja. This planed city is unusual among pre-modern Indian cities in the regularity of its broad streets, further divided by networks of gridded streets.

Popularly known as the Pink City of India. Jaipur is included on the Golden Triangle tourist circuit, along with Delhi and Agra and is one of the major popular tourist attractions of India. The major tourist attractions are the massive forts like Amber fort, Jaigarh fort & Nahargarh fort. Other attractions of Jaipur are City palace complex (Chandra mahal, Govind dev temple, city palace Museum and Jantar Mantar- World Heritage Site), Hawa Mahal, The Alber Hall Museum and Jal Mahal etc.

BEST TIME TO VISIT: Jaipur offers hot semi-arid climate and the temperatures remains relatively high all through the year. The best time for visiting the place is from October to March. 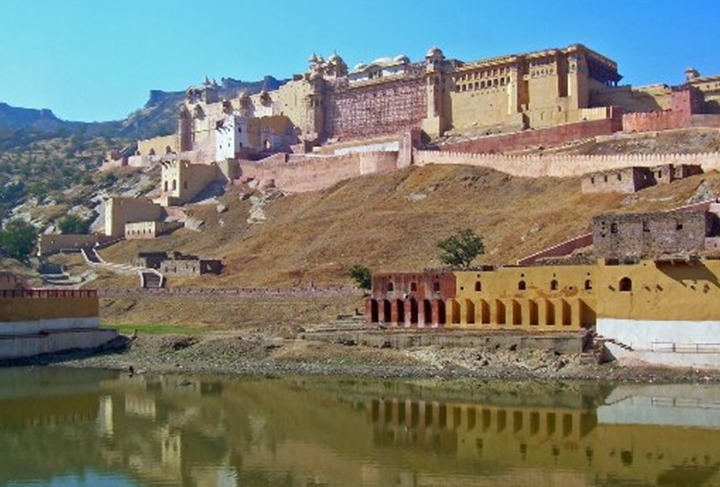 Located 11 kms from Jaipur, Amer fort is the principal tourist attractions in the Jaipur area. Located high on the hill. Amer Fort was built by Raja Man Singh and is worldly known for its artistic style of Hindu and Muslim architecture. With its large ramparts, series of gates and cobbled paths, the fort overlooks the Maota Lake, at its forefront. The palace complex inside is lavishly ornamented, Sheesh Mahal is considered by many as the world’s best chamber of Mirrors. Diwa-e-Am or the Hall of Public Audience is a beautifully proportioned hall, open on three sides and stands on two rows of ornamented pillars. Diwan-e-Khas, or the Hall of Private Audience has delicate mosaic work in glass. Sukh Mandir is guarded by sandalwood doors inlaid with ivory. Throughout the massive fort, finely carved lattice windows, exquisitely painted doorways, halls and finely sculptured pillars carve for attention. 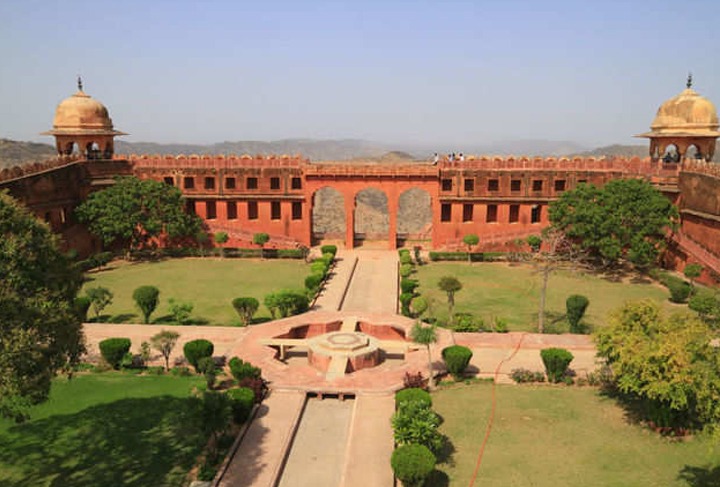 Situated on the promontory called the Cheel ka Teela, Jaigarh Fort overlooks the Amber Fort and the Maota Lake, near Amber in Jaipur. The fort was built by Jai Singh II in 1726 to protect the Amber Fort and its palace complex and was named after him. The Jaigarh fort literally meaning Victory fort has a length of 3 kms along the north-south direction and a width of 1 kms. The fort houses the palace complex (Laxmi Vilas, Lalit Mandir, Vilas Mandir and Aram Mandir), an armoury and a museum. One of the major attractions of the fort is a cannon named “Jaivana”, which was manufactured in the fort precincts and was then the world’s largest cannon on wheels. 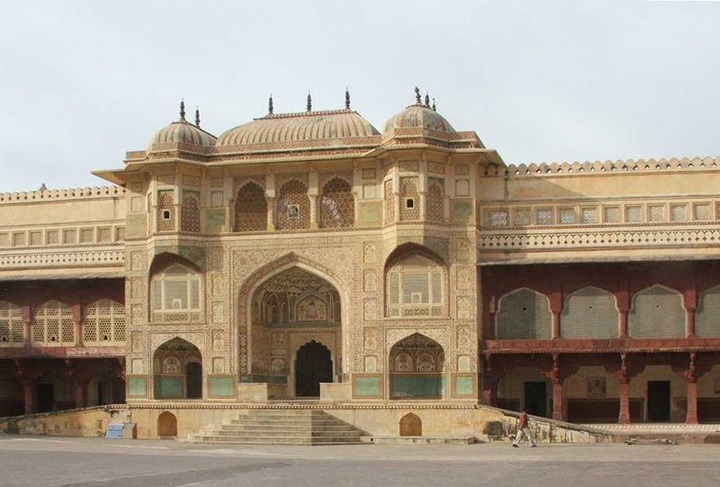 Built in 1734 by Maharaja Sawai Jai Singh II, the founder of Jaipur, the fort was constructed as a place of retreat on the summit of the ridge above the city and was used as a picnic spot for the members of the Royal family. Along with Amber Fort and Jaigarh Fort, Nahargarh once formed a strong defence ring for the city. It overlooks the city from a sheer ridge to the north, and is floodlit at night. The view of the city from the fort is impressive. Also popular for film shooting the scenes of the movie Rang De Basanti and Shuddh Desi Romance were shot here. 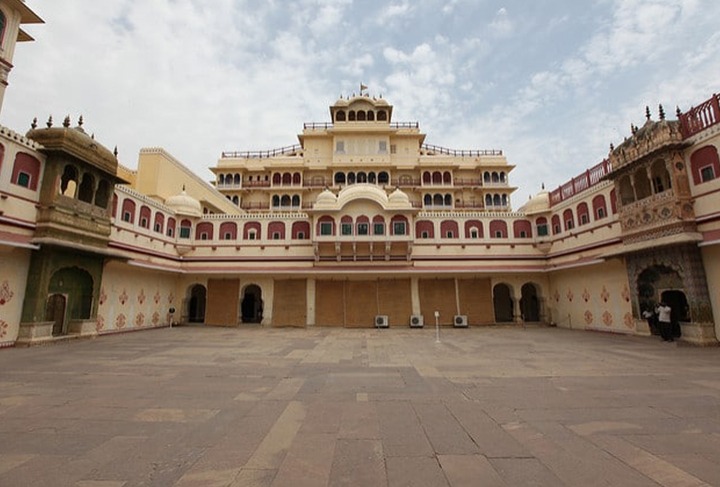 Located in the heart of Jaipur city, The City Palace complex is one of the major tourist attraction of Jaipur that attract lakhs of visitors from across the world every year. The palace designs is a combination of Mughal, Europe and the Shilpa Shastra architectural of India and is a perfect blend of colours, designs, art and culture. The beautiful palace complex houses the throne of the earth while Maharaja of Jaipur, numerous edifices, vast courtyards, attractive gardens, museums and art galleries. The Chandra Mahal, Mubarak Mahal and Jantar Mantar are some of the significant structures in the complex. The palace complex is a souvenir of the majestic history and must visit place of Jaipur. 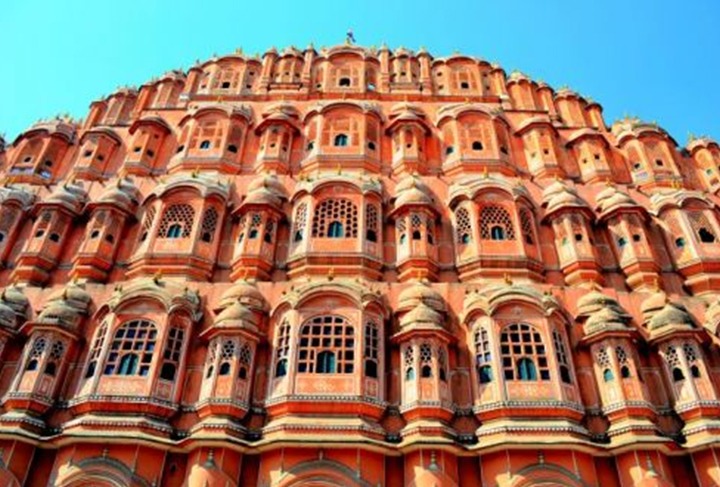 Known for its peculiar and imposing structure, Hawa Mahal was built in 1799 and is one of the most frequently visited structures in Jaipur. Shaped like a pyramid the massive five story structure of Hawa Mahal is really a stunning sight. Constructed with red and pink sandstone Hawa Mahal attains uniqueness because of the mass of semi-octagonal bays, carved sandstone grills, 900 niches, finials and domes. You can see various casements on the outer side of the Hawa Mahal. The tiny windows and the stone carved screens are wonderful creation of arts that gives the building a remarkable grandeur. Also known as the Palace of Winds, Hawa Mahal is the most picturised face of Jaipur. 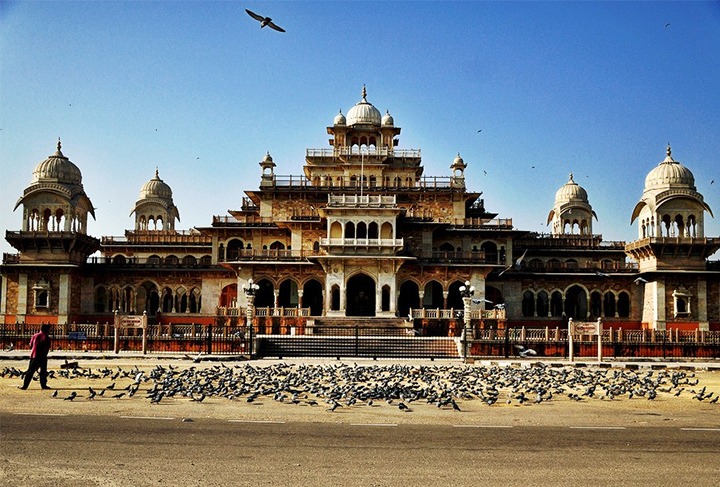 Situated in Ram Niwas Garden, Albert Hall Museum is a fine example of Indo-Saracenic architecture. The building was designed by Sir Samuel Swinton Jacob Jacob in 1876 for the purpose of greeting King Edward VII, Prince of Wales on his visit to India and was opened as public museum in 1887. It is also called the Government Central Museum. Thus museum exhibits a rare collection of ancient stuffs including miniature paintings, carpets, metal and wood crafts, toys, dolls, arms and weapons and an Egyptian mummy belonging to the Ptolemaic Era. The most extraordinary of them is the carpet that depicts the scene of a Persian garden with gushing streams. 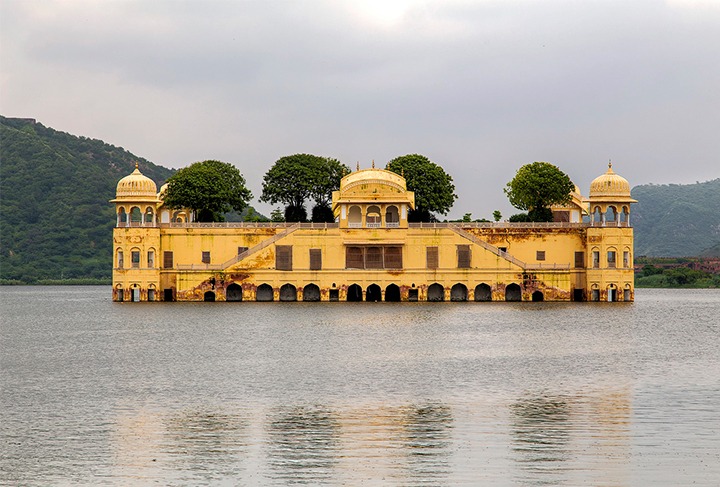 Located in the middle of the Man Sagar Lake, The Jal Mahal Palace is the popular attraction of Jaipur. Jal Mahal is considered as one of the most beautiful architectural palace that was built with the Mughal and Rajput craftsmanship. The palace provides a charming view of the Man Sagar Lake and the Nahargarh hills that border it. Traditional Rajput style wooden boats and a gentle splashing of oars on the clear lake waters takes you to Jal Mahal. The five story high palace is made of red stone and have chattris on all the four corners of the palace. The palace has an impressive terrace garden.