Located on the west bank of the river Yamuna New Delhi, the capital of India, is a bustling metropolis that has an amazing mix of modernisation and carefully preserved antiquity. Delhi is a city dotted with ancient monuments, yet building world class infrastructure for the future. The city offers glimpse of India’s religious diversity, yet retains the essence of each culture (the ancient Indian, the Mughal, the British) in its purest form. Modern New Delhi was built by a British architect Edward Lutyens in 1912 as the new capital of the British Raj. The Victorian architecture now intermingles with the city’s modern high rise buildings. Concrete flyovers built to ease the growing traffic are interspersed with well laid gardens, Mughal tombs, forts and monuments. The city traces its history to Mahabharata, the great epic tale of wars fought between estranged cousins, the Kauravas and the Pandavas for the city of Indraprastha (present Delhi). The major tourist attractions here are world heritage sites Red Fort and Qutub Minar. Other popular attraction of Delhi are Humayun’s Tomb, Parliament House, Rastrarpati Bhawan, India Gate, Lotus Temple and Akashardham Temple etc. 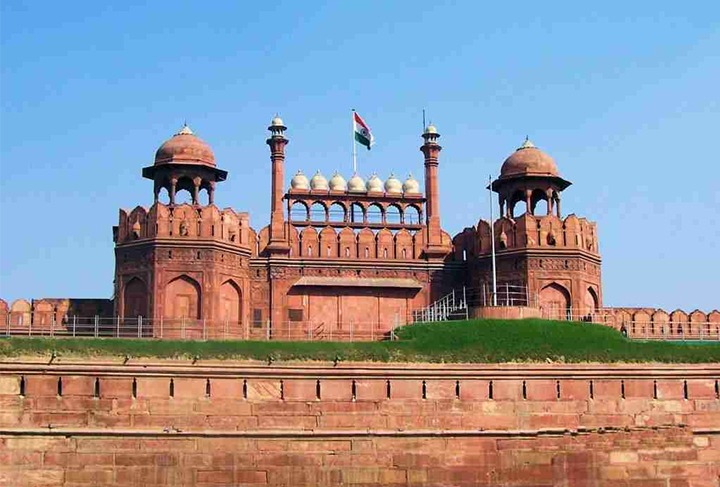 A 17th century fort complex, constructed in the walled city of Old Delhi, it dates from the very peak of Mughal Power. Built by the Mughal Emperor, Shahjahan in 1648, it is a grandiose of pomp and power. Designated as the UNESCO World heritage site, the planning and aesthetics of this Fort represent the zenith of Mughal creativity which prevailed during the reign of Emperor Shah Jahan. The main gate, Lahore Gate, is one of the emotional and symbolic focal points of the modern Indian nation and attracts a major crowd on each Independence Day. An evening sound and light show re-creates events in India’s history connected with the fort. The fort is closed on Monday. 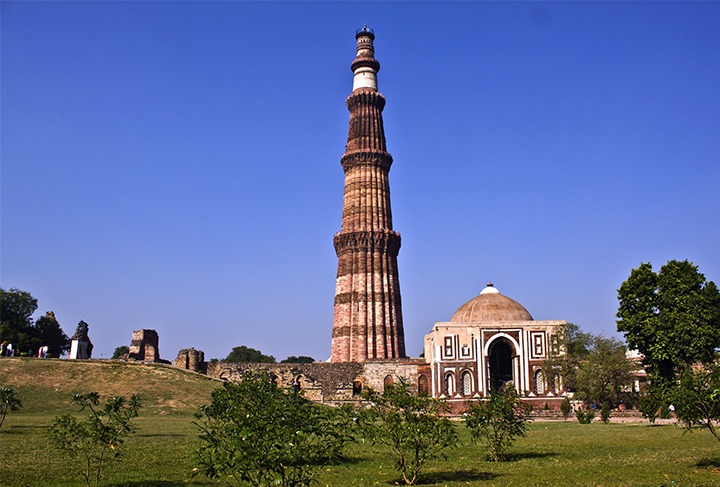 The Qutub Minar is located in Qutb complex, Mehrauli in South Delhi. It was built by Qutub-ud-din Aibak of the Slave Dynasty, who took possession of Delhi in 1206. It is a fluted red sandstone tower, which tapers up to a height of 72.5 meters and is covered with intricate carvings and verses from the Qur’an. Qutub-ud-din Aibak began constructing this victory tower as a sign of Muslim domination of Delhi and as a minaret for the muezzin to call the faithful to prayer. However, only the first storey was completed by Qutub-ud-din. The other storeys were built by his successor Iltutmish. The two circular storeys in white marble were built by Ferozshah Tughlaq in 1368, replacing the original fourth storey. The balconies in the tower are supported by exquisite stalactite designs. The tapering tower has pointed and circular flutings on the first storey and star-shaped ones on the second and third storeys. One reaches the balconies through a winding staircase in the tower. It consists of 380 steps. There are little openings along its length to admit air and light.

Located near the crossing of Mathura road and Lodhi road, this magnificent garden tomb is the first substantial example of Mughal architecture in India. Declared as UNESCO world heritage site. Humayun Tomb It was built in 1565 A.D. nine years after the death of Humayun, by his senior widow Bega Begam. Inside the walled enclosure the most notable features are the garden squares (chaharbagh) with pathways water channels, centrally located well proportional mausoleum topped by double dome. There are several graves of Mughal rulers located inside the walled enclosure. 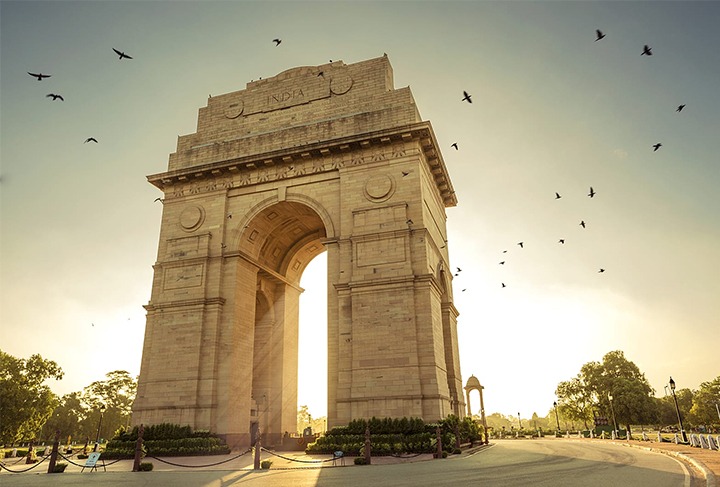 The India Gate is the national monument of India. Situated in the heart of New Delhi, the India Gate was designed by Sir Edwin Lutyens, inspired by the Arc de Triomphe in Paris. It was built in 1931. Originally known as the All India War Memorial, it is a prominent landmark in Delhi and commemorates the 90,000 soldiers of the Indian Army who lost their lives while fighting for the Indian Empire, or more correctly the British Raj, in World War I and the Third Anglo-Afghan War. 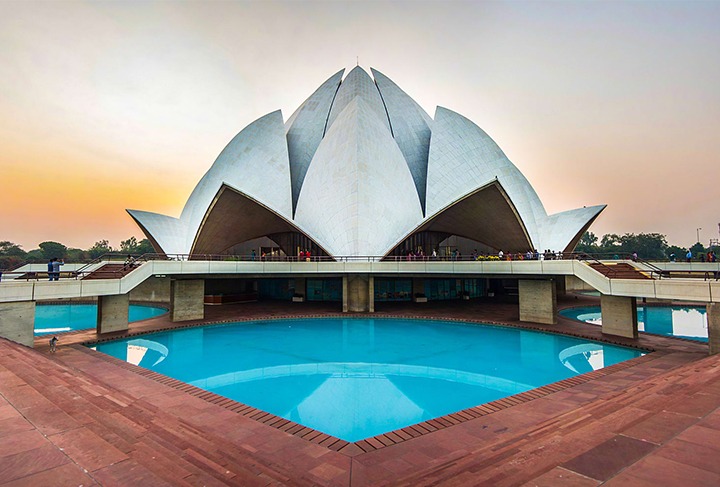 East of Nehru place, this temple is built in the shape of a lotus flower and is the last of seven Major Bahai’s temples built around the world. Completed in1986 it is set among the lush green landscaped gardens. The structure is made up of pure white marble The architect Furiburz Sabha chose the lotus as the symbol common to Hinduism, Buddhism, Bhai TempleJainism and Islam. Adherents of any faith are free to visit the temple and pray or meditate. Around the blooming petals there are nine pools of water, which light up, in natural light. It looks spectacular at dusk when it is flood lit. The temple is closed on Monday. 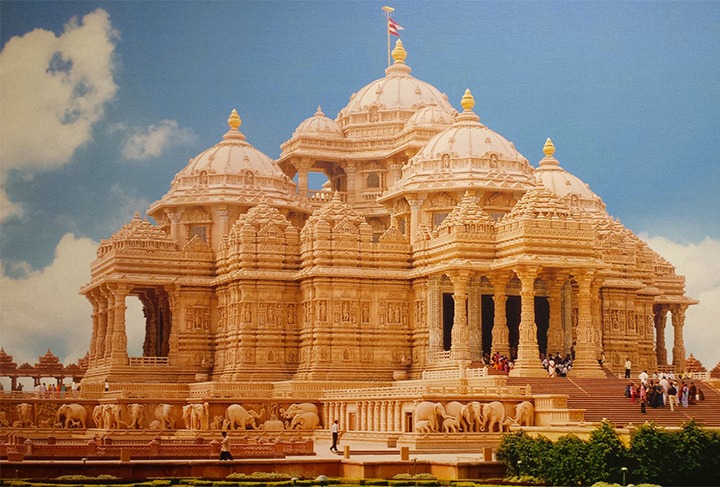 The Akshardham Temple is a massive temple complex in Delhi. It has got 20,000 statues, floral motifs, arches as well as exquisitely carved pillars. The Akshardham Temple in Delhi was constructed under the patronage of the Bochasanvasi Aksharpurushottam Swaminarayan Sanstha (BAPS) and initiated on November 7, 2005. The temple complex represents an unique blend of the Hindu religion and Indian culture. The Akshardham temple complex stands on the banks of the Yamuna and has more than a 100 acres of lawn decorated with water fountains and carved pavilions. An amount of 2 billions was spent on the building that took around 2 years to complete. There is the IMAX theater, the Swaminarayan temple and a beautiful musical fountain in the large Akshardham temple in Delhi. Akashardham temple is closed on Monday.

RESTURANTS: Almost all the Branded Restaurants operating in India have their outlets in Delhi.